Be My Cat: A Film for Anne‘s new Signed DVD is now available worldwide! Order your copy and it will be signed & personally shipped to you by the movie’s director, producer, writer & star, Adrian Țofei! Two versions available: one featuring the new poster by Terror Films and one featuring the original poster by Adrian Țofei. Both have identical content and include never-before-seen extra scenes, English closed captions and improved image & sound.

Click below to order the signed DVD with the new cover via PayPal at €24.95 + €14 worldwide shipping:

Click below to order the signed DVD with the original cover via PayPal at €24.95 + €14 worldwide shipping: 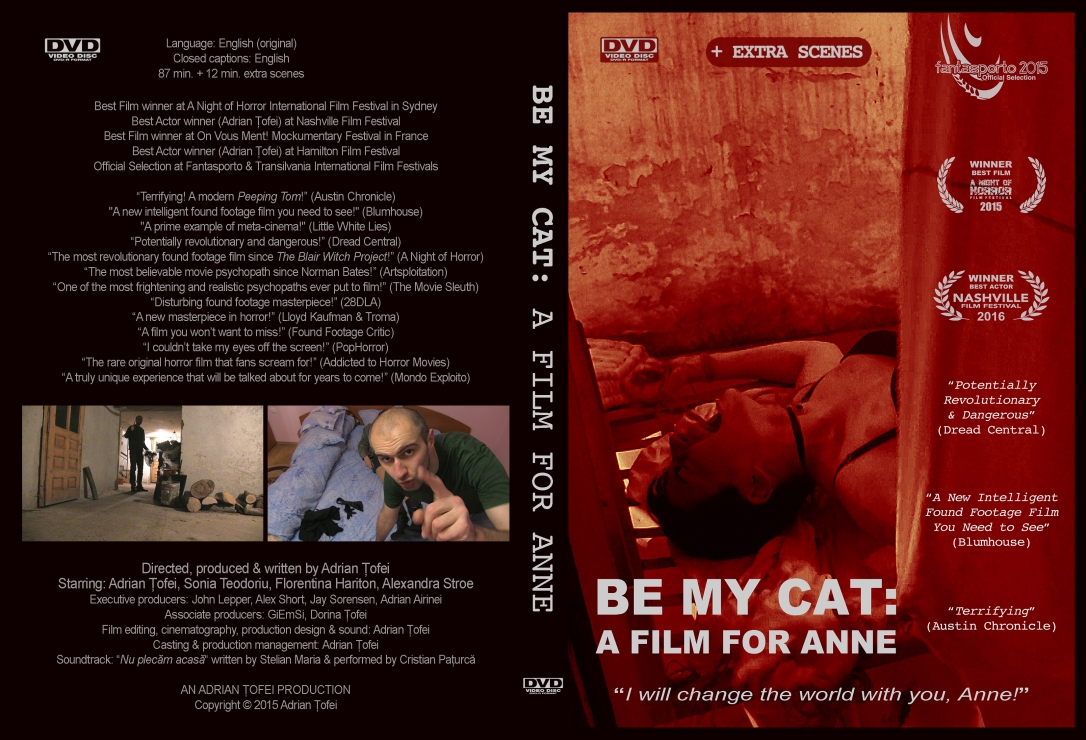 Expected delivery time: between 2 weeks and 2 months, depending on your location and other factors. The DVDs are personally packaged and shipped by Adrian Țofei in air-bubble envelopes with tracking numbers.

In the news: Cult Horror Movie “Be My Cat: A Film for Anne” Released on DVD and YouTube (HorrorNews.net)

More about the movie:

Be My Cat: A Film for Anne has been described as a cult film by fans and film professionals and saw a constant rise in popularity since its initial festival premiere at Fantasporto in 2015, mainly by word of mouth from enthusiastic fans and critics in the absence of a marketing budget. Adrian Țofei, who came from a background in method acting and theatre, partially improvised the movie in his hometown in Romania on a $10,000 budget as director, producer, writer, lead actor, editor, cinematographer and most other jobs usually performed by a film crew, he never used a camera before in his life, had no crew present during shootings other than him and the actresses, partially lived in character, met the actresses for the first time in character with the camera on, and kept only first takes in the final cut. Be My Cat went on to win numerous awards and critical acclaim, including Best Actor for Adrian at Nashville Film Festival and Best Film at A Night of Horror Film Festival in Sydney, being called “a new intelligent found footage film you need to see” by Blumhouse, “terrifying” by Austin Chronicle and “potentially revolutionary and dangerous” by Dread Central.

Get Be My Cat on Signed DVD

Get Be My Cat on Signed DVD